The labels, from the simplest to the most complex (from Valpolicella to Recioto), come undone like a story of images along a leading theme: a collage of photos that represent the vineyards, the old rural house still to be renovated, the owners who strongly desired to create the Montecariano wine company in the heart of Valpolicella. Here the land has an ancient scar. It contains the traces of a time that is still filled with the slow, punctual miracle of wine that comes to life. Painters such as Semeghini, Pigato and Zoppi took their inspiration from the landscape, stealing the faint shades of the autumn season from Valpolicella.

The legend of Amarone became real in this valley. It is a great meditative wine that is said to have originated from fire but which never burns (legend has it that a producer who wanted to make Recioto placed grapes in drums to dry them and then forgot about them. As the temperature became hotter, the grapes continued fermenting, becoming continually drier and more bitter, (amaro in Italian means bitter), and this is how the name Amarone came about.)
The same is true for the Amarone Montecariano label with its “old-looking” label, as if there were old faded photographs held together by stickers, because memories have a special colour and warmth.

The label is the photo of the hill with the vines growing, part of the southern section of hills that separate the Fumana valley from the Marano valley. The wind blows around the vines, caresses the shoots and the leaves, and gently touches the bunches of grapes.

The figures of three wine growers can be seen between the vines; they are well aware that Nature decides on the Amarone grapes. With expert hands, they select the bunches that will be dried in the drying loft. An image of the old rural house is shown. 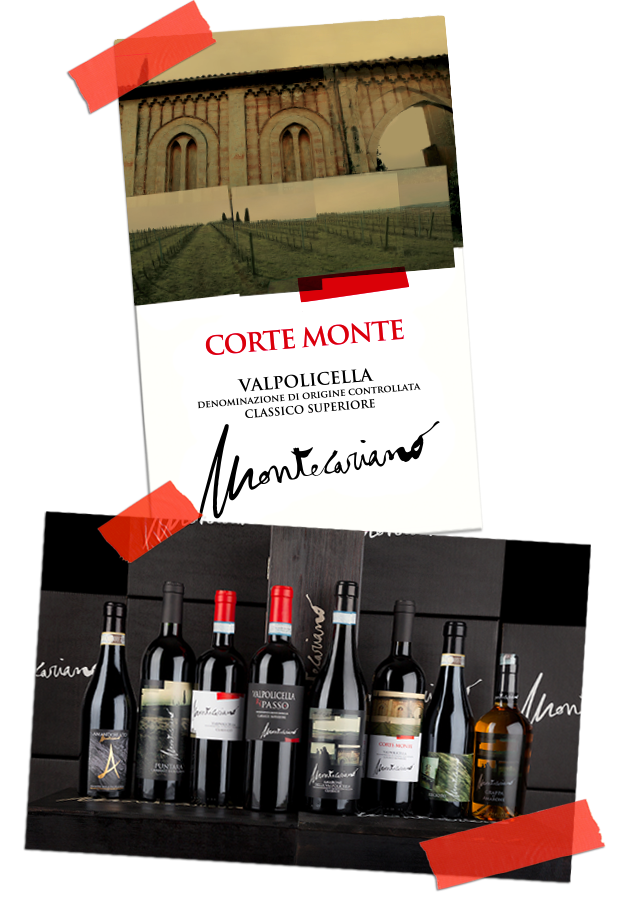